From Karts to Sports Cars 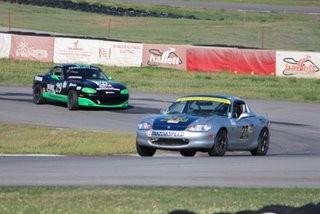 Are you a karter wondering whether you are ready to make the leap to sports car racing? 15-year old Max Nufer just made the transition and has some interesting takeaways to consider in his impressive debut. Keep your eye out for Max!

The transition from karts to cars is not always an easy one. While karting can teach a racer many things, there are still valuable lessons to be learned when stepping into a car, especially going to a production-based class such as Spec Miata. That’s what 15-year-old Max Nufer recently discovered in his first SCCA Majors race at the Hallett Motor Racing circuit in Oklahoma.

Nufer, of Wildwood, Mo., started competing in karts at age 5 and spent 10 years progressing through the kart ranks up to the fast Shifter karts and TAG 125 classes. Last summer, he attended several Skip Barber schools and competed in the Skip Barber Karts to Cars Scholarship Shootout before earning his SCCA Competition License earlier this year.

Nufer and his team, Nufer Race Engineering (NRE) competed in their first Majors event in April, having only been on track once before with the Spec Miata supported by Mazda, Suburban Autobody and Florissant Auto Paint. It was also Nufer’s first time on Hoosiers, so figuring out correct pressures for the shorter, timed races on Saturday and the longer races on Sunday proved to be a challenge.

Fourteen drivers from Michigan, Colorado, Texas, Tennessee and Missouri, including several National Champions, were entered for the event.

In Saturday’s qualifying session, Max demonstrated that his Hoosier tires provided much improved levels of grip as compared to the first regional race he had done two weeks earlier when he raced on used tires that came with his recently purchased 1999 Miata. Max qualified the NRE Miata in a solid fifth place of the 14 cars. His time of 1m 29.486 was nearly two seconds a lap faster than his previous best time running on old tires.

With all race teams watching the weather radar for potential rain for the timed sprint on Saturday, all cars were on dry tires; no one was willing to gamble on running rain tires. With only a 25 minute race, there would be no time to pit to change tires.

A grid worker asked Nufer and his crew chief if they were nervous. He replied, “No, this is just like kart racing only with slightly larger cars and seat belts attached with a roll cage.” He said he felt much lower stress from a safety perspective.

At the start, Nufer missed a shift to third gear which cost him several positions. As the field spread out, Max started working to catch back up.

The first communication on the radio from Nufer was about the rain that started falling on the second lap – it was getting really slick in some corners. Soon it was pouring rain and cars started to go off track; there were many spins and off-track excursions by other cars. Nufer started retaking the positions he lost at the start. His experience driving shifter karts in the rain (without rain tires) helped him cope with the track conditions. The leader of the race, Jim Drago, two-time SCCA National Champion, went off track at Turn 2. Max was closing in on the leaders and was now up to fourth place. The rain came down even harder and on the last lap Max began his attack on Luke Bickham in third. Max got along side of Bickham but was unable to complete the pass.

On Sunday, rain was not a threat. Nufer again started from fifth spot on the grid and lost one position at the start. With cars three-wide going into Turn 1, he got squeezed. The race on Sunday was much longer – 25 laps or 40 minutes, whichever came first. Max worked hard to catch Bickham but could not keep up in the early stages. Over the radio he communicated his challenge with low grip, which caused the car to slide excessively.

Before the race, the team debated tire pressures, knowing that this race would be much longer than the day before. It decided to go slightly lower on starting tire pressures with its strategy to be fast at the end of the race. It apparently was a sound plan, because Nufer set his fastest lap of the race on lap 20 before turning his quickest time of the weekend on lap 24.

Nufer dove inside of Bickham for fifth in the penultimate turn and was side by side all of the way through. Bickham kicked up dirt at the exit but did not back off as the two of them headed into the final turn still side by side. Once again, though, Nufer was unable to complete the pass.

Nufer competes again this weekend at Gateway Motorsports Park and then the 60th Annual June Sprints at Road America. Find him on Facebook or at www.nreusa.com.