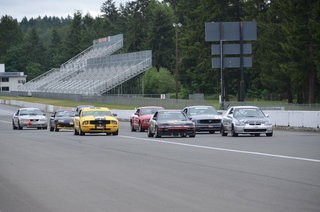 KENT, Wash. (May 25, 2015) – Round 10 of the SCCA Western Conference U.S. Majors Tour concluded at Pacific Raceways as part of a doubleheader race weekend that capped off the Memorial Day holiday. The event brought together some of the most talented amateur racecar drivers on the West Coast on a weekend where winners in many different disciplines of motorsport were honored.

At Pacific Raceways, drivers from 24 Runoffs-eligible classes completed six 20-lap races at the 10-turn, 2.25-mile circuit. The starting grid for each race was ordered by the fastest single lap turned by each driver throughout the weekend, up until Monday. That included laps from the two 15-minute qualifying sessions run on Saturday and Sunday, as well as laps from Sunday’s sprint race.

Here is a summary of Monday’s competition:

Race One: Both Super Touring Lite and Touring 4 saw repeat winners. Paul Whiting, of Pahrump, Nevada, took home the win in STL, and the overall win, in his No. 57 Honda CRX. Like Sunday Whiting was able to cover the field and best his closest rival, Thomas Lepper.

Lance Stewart, of Coconut Grove, Florida, also snagged the win by, once again, finishing ahead of Kristina Etherington.

Race Two: In a race group that combined the Spec Racers with three classes of closed-fender cars, Patrick Byrne, of Spokane, Washington, took home the feature race win in his No. 02 Spec Racer Ford Gen3. However, there was also some great racing that went on deeper in the pack.

Todd Harris, of Portland, Oregon, tallied a second win on the weekend, but this time in the previous generation of SRF car. In his No. 24x Pro Drive Racing/Flat Out SRF, Harris beat Leonardo Del Castillo to the line by 0.869-second. In addition, Harris also claimed a new track record.

Further back, the battle for B-Spec supremacy was renewed between Eric Boucher and Derrick Ambrose. Boucher, of Auburn, California completed the sweep while also setting a new track record in his No. 35 The Wife Mazda2.

Also taking home wins on Monday were Michelle Abbate, of Henderson, Nevada, in Super Touring Under and Marco Gallaher, of Santa Rosa, California, in Spec Miata.

Race Three: The production group was fairly spaced out by the time the overall leader – Jess Heitman, of Portland, Oregon – saw the checkered flag. Heitman also added another feather in his cap as he got the best of Runoffs winning driver Joe Huffaker twice. However, Huffaker still showed his driving talent behind the wheel as he set the fastest lap of the race.

Race Four: In the small-bore formula group, winners in both Formula Vee and Formula F were decided by less than 0.3-second. Rick Payne, of Mission, British Columbia, Canada, recorded his second overall, and Formula F class, win on the weekend in his No. 75 Payton Pools Van Diemen. Payne pulled off the two-race feat after beating Mark Keller to the line by just 0.275-second.

Formula Vee also saw a repeat winner in Brian McCarthy, of Sacramento, California. Like Sunday’s race, McCarthy finished at the front of a tightly-packed FV field. He took home victory with only a 0.296-second margin to second place.

Race Five: In Formula 1000, Gary Hickman (No. 76 Edge Engineering Inc. Phoenix F1000), of Santee, California, was the class and overall group winner. By doing that, Hickman kept Larry Vollum one win short of a weekend sweep to go with his new track record set on Monday.

Drivers in the group who did complete double wins on the weekend were Jeffery Lederman, of Vacaville, California, in Prototype 1 and Edward Lever, of Bakersfield, California, in Formula Atlantic.

Race Six: The big-bore cars put a period on the weekend’s on-track activities. Erich Joiner, of Torrance, California, took home the day-two win in GT-2. His class win was not in question by the end of the 20-lap race as he rolled across the finish line, in his No. 3 Tool of North America Porsche 997, with four laps in-hand over his class competitor.

Marc Hoover, of Shingle Springs, California, took home a second win in Touring 1 as did Collin Jackson, of Langley, British Columbia, Canada, in GT-3; Roger Start, of Redmond, Washington, in GT-1 and Russ Peterson, of Menlo Park, California, in Touring 2.

Additional information regarding the Majors at Pacific Raceways, including full results, can be found at SCCA.com/PacificMajors.