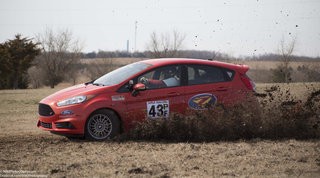 First time attendees (Rookies) at the RallyCross National Championship will be represented well again in 2015. Of the 90 pre-registered competitor 37 (41%) of them will be first timers. This is similar in numbers to the last five years with a high of 52 in 2011 or more than half the field.

Rookies will be coming for 14 different states this year. Iowa will bring the most first time attendees with 10 rookies followed up by Minnesota 7 rookies. Rookies will also be coming from as far away as Virginia, Georgia and Connecticut to make their debut at the premier event for SCCA RallyCross.

Several of the rookies are having a good year locally with most rookies finishing in the top spot at local events and in the top 5 at national challenges. Last year 10 of the 40 rookies finished in the top 5 in their class with one overall win and two top three finishes. The class of 2015 looks capable of brining the high level of competition demanded by the RallyCross National Championship and being major contributors at this year’s event. Here is a sneak peek at the rookies of 2015.

Four new competitors enter the fray in SF for 2015. Justin Andrews, Ozark Mountain RallyCross chair, is looking good this year in his 1999 Neon with a win in class and quick times at local events. Dustin Etheridge is also showing some serious speed with a win at the Southwest National Challenge and local wins. Dustin has been getting seat time across the Midwest and Southwest from his Arkansas homebase in preparation for the National Championship. Ken Heaps is coming on with improvement all year leading to a second at the Rocky Mountain National Challenge. Stephen Hyatt has been to five National Championships and this will be the first one from the driver seat. Stephen has been strong with several local wins and 3rd at a National Challenge. Looks for good things out of this year four rookies.

Charles and Matt Davis share a ride and also the possibility of a National Championship. With these two as the only drivers currently registered for SR one of them will walk away a champion. These two have been battling all year long swapping first and second place in their local region. Matt got the best of Charles at the Dixie National Challenge but they have both shown they can win. As both drivers are in the same car, this is going to come down to who is better on that day. Expect to see a close competition with these two.

Only three of the 11 Stock All Wheel Drive competitors will be new for 2015. Michael Geromine will be bringing his 2.5RS in hopes of a top finish. Bryan Meeks is doing well in 2015 with multiple top three finishes locally and a fourth at the Dixie National Challenge. Bryan will be a solid competitor for the 2015 National championship. Michael Phelps hales from Iowa and is looking to top the podium with his 2012 WRX. In a field filled with extremely fast drivers these rookie will have to bring their best to compete with the veterans of the class. On time will tell if they have the speed.

Greg will be the only rookie in the Prepared Front Wheel Drive class. With only four in the class Greg will have the newest ride but stiff competition from the other three competitors. Greg has been running in the KC Region and will bring his best to the National Championship for 2015 in hopes of bringing home a trophy. With constancy for the entire competition Greg may have what it takes to sit atop the podium.

Couple, Katie Orgler and Shawn Roberts will make up half the field in PR with their Mazda Miatas. Competing together in the Virginia area, they have met in competition on more than one occasion. Shawn has bested Katie in the past and with only four competitors both have very good chance to make the podium in 2015. The change of scenery could be what Katie needs to bring home a win over Shawn but only time will tell as they make the long trek from Virginia to compete in this year’s National Championship.

Prepared All Wheel Drive is looking to be the biggest class in 2015 with five brave souls adding new talent to the mix. Mike Coons has been running in the St. Louis Region and is showing continual progress with a second in class/fourth overall in his last Stateline RallyCross. Kenneth Little running out of the Central Florida Region looks to be a serious contender in 2015. Kenneth is currently winning his region and took first overall at the Dixie National Challenge. Look for Kenneth to be blazing fast at the National Championship. Keith Pizio is also showing tons of speed in Colorado with local wins and a second place in the Rocky Mountain National Challenge. Keith will be yet another Colorado force to contend with. Chris Regan brings another Mazdaspeed 6 to PA. Chris has been gaining momentum all year in the Northeast where there is plenty of competition to challenge his skills. Christian Retterer brings another DSM to play with the Subies and Evos. Don’t underestimate this Eclipse or Christian as he has a fourth from the Dixie National Challenge and several top three finishes in his local region. Rookies are coming from across the country this year to up the ante in an already talent-filled field. How will these rookies do in 2015?

Modified Front Wheel Drive welcomes five newcomers to the 2015 National Championship including three local to Iowa, one from Michigan and one from Minnesota. David Capesius and Randy Patten will be sharing a ride taking their 1995 Ford Escort to battle at this year’s event. David has been putting in solid rides in IA and MN with seconds to his co-driver Randy Patten. Randy has shown a ton of speed with an 1st and overall fastest time at local events. Randy and David will be a pair to contend with for 2015 Championship. Cory Grant will join the minority in his 1989 VW Jetta. Cory will be ready to duke it out with the Hondas for the title. Daniel Hutchinson has racked up several podium positions in his local region and currently leads his class in the Detroit Region. Daniel is looking to expand on that at the National Championship. Like more than half the field, Daniel will be driving his Honda to a potential podium finish. Jesse Lang has finished top of class and two runner-up positions for overall finishes in the Land O’ Lakes Region including a win over David Capesius. Jesse looks very quick and ready for the competition the National Championship will bring.  These rookies will have their work cut out for them with field of previous National Champions.

More than half the field in MR will be first time attendees at the 2015 National Championship which could make for some real unexpected results. Ken Forde will fit right in with his 1997 Mazda Miata MX-5. Kevin is looking to bring his best in a field of competitive drivers and cars. Kyle Nilson has been running top three in his home state of Iowa. With the nationals being at a place he is familiar with this may be his time to shine. Matthew Olson brings the only Ford Mustang to the National Championship and for good reason. Matthew has been very successful racing the Mustang as he looks to expand on that success piloting the 5.0 to some fast times. Scott Parrott and Nathan Rood bring the only Porsche currently registered for this year’s National Championship. Scott bested Nathan by less than 4 second earlier this year in the Land O’ Lakes Region but both look capable of putting down some solid times in Indianola. Nick Reynolds from Alabama will be another hot-shoe to contend with; at only 16 Nick has been racing karts for years and knows how to bring the heat. Look for Nick to put down some quick times in his Miata. With this much new blood in the Modified Rear there could a real shake-up at the top of MR during the 2015 National Championship.

More than half the field will be making their debut in this wickedly fast class. This year’s newcomers are dominantly Subaru as is the class with only one Evo and one Mazda separating an otherwise all Subie field. Scott Banes will be bringing his 1996 Subaru from Detroit Region where has been posting podium finishes including a class win in 2015. Cory Chandler join the fray in his 2013 Subaru. Having posted a best in class and having raced at the site; Cory may surprise some with his results. Kevin Dobowolski has been racing throughout the region in his WRX wagon. Kevin is still improving in his wagon and maybe the Nationals will be a breakthrough moment at his home track. Dillon Dunphy will be racing the only Mazda in the class but expect him to be competitive with the Subies having two best in class from his local region. John Jacobs is a big part of the RallyCross scene in IA and brings his 1989 Subaru XT6 for the first time in MA. With a win in MA at local events, John will show what can be done with an older ride. Joshua Kropp also makes his first appearance at Nationals in his 2003 WRX. Expect Joshua to drive the wheels off his Subaru to stay competitive in this extremely fast class. Peter Schaefer will bring yet another version of a potent Subaru with his 2000 RS. Peter has been doing well in his region as he is looking to tear it up at this year’s Championship.   James Sherman is looking to improve his results at the Nationals after a 7th in the Dixie National Championship. Expect James to bring his A-Game with the 2011 WRX. There is no lack of talent in Modified All as it appears the rookies will be bringing another group of talent and speed to this year’s event.

With so much new talent entering the National Championship it is hard to tell how it will all turn out. Whether rookie or seasoned veteran, know that all will bring the best they have as they deal with the challenge of competing for top spot at the SCCA 2015 National Championship. All competitors are also vying to be chosen to spend two days at the Team O’Neil Rally School. That award will go to the competitor who shows the most potential to stand atop the podium if they were to attend the school.

Good Luck to all the competitors and most of all enjoy the ride.