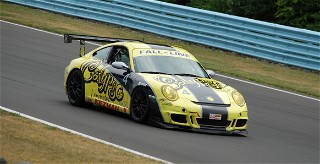 Watkins Glen, N.Y. (June 25, 2016) – Round Nine of the SCCA U.S. Majors Tour Northeast Conference began today at the picturesque and historic Watkins Glen International. Afternoon racing was slightly delayed due to some needed guardrail repair, which also resulted in Group 7’s race being rescheduled for 9:20 a.m. Sunday. Additionally, Round Nine races were shortened to 20 minutes.

Shortened events didn’t hamper the excitement, however, as racing got good immediately in Group 1 with Kevin Leigh leading the field through turn 1 in his Hoosier/Carbotech/JBB Racing E Production BMW M3 and never looked back. He was joined on the front row by Kyle Disque in his TRD/Hoosier Tire GT-Lite Toyota Tercel who allowed the E and F Production cars who surrounded him to have a clean race while maintaining a commanding lead over his GTL competition.

Group 4 featured the ground-pounding GT-1, 2, 3, American Sedan, and Touring 1 cars led by Jack Busch in his Spectro Oils/Hoosier Tire/Leifert Motorsports GT-1 Ford Mustang. While Jack drove to a commanding lead, Tim Kezman worked a different strategy in his Calypso Lemonade/Fall-Line Motorsports GT-2 Porsche 997. While Aaron Quine led the majority of the 11-lap race in his Spillfix/ECC/Schultz Mizer Machine Chevrolet Camaro, Kezman kept him within reach and was able to capitalize with a last-lap pass to take the victory.

Scott Rettich punctuated the Group 6 race in a similar fashion in his Alliance Autosport/PDI Communication Systems SCCA Enterprises SRF3 by claiming the lead with a second-to-last-lap pass. Rettich was assisted by a mid-race caution that allowed him to keep Lee McNeish at a manageable distance. When the green flag resumed the race, Rettich took the lead and was able to hold on as he took the white flag, then the checkers to end the race.

Round Ten of the SCCA U.S. Majors Tour Northeast Conference continues tomorrow, June 26th with seven race groups. Racing will begin at 9:20 a.m. EDT with the final race of Round Nine and will be directly followed by the scheduled Round Ten races. Results from the weekend are available at scca.com/wgimajors. Live timing for this weekend’s event is available at scca.com/live. More information on the SCCA U.S. Majors Tour can be found at scca.com/Majors.