At A Glance: Portland and High Plains Majors 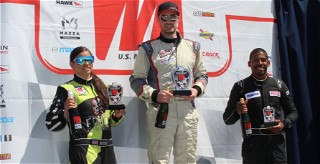 But It Ain’t Over Out West – A few Class Championships are still up for grabs in the Western Conference. In E Production, Kale Swifts has a one-point lead over Anthony Jimerson – and both are schedule to appear at this weekend’s SCCA U.S. Majors Tour at Portland International Raceway. And in Spec Racer Ford Gen3, John Black has a points lead on Todd Harris, but both are scheduled to be on track in Portland. The Formula F battle is tight, too, with Edward Erlandson and Charles Horn tied at 153 points. But only Erlandson is currently registered to race this weekend. Keep track of developments all weekend live online at www.scca.com/live.

Touring Tussle in Mid-States – The big battle during this weekend’s SCCA U.S. Majors Tour at High Plains Raceway will be in the Touring 3 Class. Robert Schader leads David Muramoto by one point, and they’re both on the T3 entry list for Colorado. Then in Super Touring Lite, Scott Bettinger is only 13 points behind Brian Laughlin, but Laughlin may not be running at High Plains. So this could very well be Bettinger’s chance to claim the STL Conference Championship. And Michael Pettiford looks to lock down two Conference Championships, one in Touring 1 and the other in Touring 2, at the weekend’s conclusion. See who does what live at www.scca.com/live.

Four Chances Remaining – When fireworks go off on July 4, three of the five SCCA U.S. Majors Tour Conferences will have completed their racing for the year. The Southeast Conference crowned its Champions back in April, and the Western Conference and Mid-States Conference will be done. That leaves only four SCCA U.S. Majors Tour races remaining in 2016, and only four opportunities left to qualify for the SCCA National Championship Runoffs, presented by Garmin VIRB, which will take place at Mid-Ohio Sports Car Course in September. There are also only two Conferences, the Northeast and Northern, that have yet to name Champions this year.

Live Timing and Notes: Live Timing & Scoring, lap notes and more via the SCCA® Pit Board are available for all sessions through www.scca.com/live.

(For a web-resolution photo, right-click the photo in the story and “save as”)