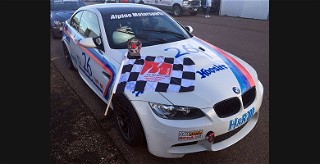 After qualifying on a damp to drying track in the morning, Group 1’s 25-minute race around the 2.55-mile circuit was again met with rain, in the form of an hour-long shower over lunch, just before the field was set to take the green. The Touring 2 field, which swept the top three overall spots, opted for dry weather tires, while several cars further back in the field, including the F Production front-runners in back half of the split start opted for rains.

Dan Spirek took the overall and Touring 2 lead ahead of Alpine Motorsports BMW M3 teammate Jim Leithauser, Michael Pettiford’s Pontiac Solstice GXP and Jeff Jensen’s Touring 4 Acura RSX early, as the cars slipped and slid around the track. F Production polesitter Bill Hingston moved through the Touring and Super Touring Lite field from 11th on the grid to take the overall lead in his Mazda Miata on lap three. Two laps later, 17th-starting Eric Prill followed suit in his F Production Miata. But the rain tire-shod cars needed to make hay while the sun wasn’t shining, and by lap 5, the track was heating up and coming to the dry-tire cars. Prill departed on lap six with a mechanical, and four laps later, Spirek and Leithauser were past Hingston, who admitted he had backed off to conserve his tires, for the overall lead. The duo finished just 0.742-second apart.

“We had a lot of fun today,” Spirek said. “It was a bit wet, and we made the right tire choice with the Hoosier dry tires. I had a great race with my teammate Jim [Leithauser].”

Spirek returned to High Plains for the first time since 2014, after recovering from health challenges in 2015.

“It’s great to be back here in the car at High Plains,” he said. “I have to thank Hoosier Tires and my teammates, Jason Ott and Jim Leithauser, for the work they do on the cars and in coaching me.”

After coming home with the Touring 2 bronze in Race 1, Pettiford moved to his Touring 1 Corvette and was able to continue his Mid-States dominance of that class with his fifth-consecutive win. He took the overall win in Group 3 after early leader, GT-2 class driver Jim Valdez opted to pull over and let the Touring 1 battle between Pettiford, Ronald Hugate and Dan Goodman through.

In the final Majors race of the day, Spec Racer Ford Gen 3 polesitter and Conference point leader Grayson Strathman held the lead for the opening three laps, but then saw third-starting Keith Verges move to the point on lap four. Strathman hounded him for the next several laps before Verges was able to stretch the gap to take his first win of the season.

“Grayson gave me good racing room and was all over me after I got by him,” Verges said. “He made maybe just a little bit of a bobble and then I was able to gap him and manage that gap, overcoming a broken gearbox in qualifying. I’m happy to be back on the podium again. It’s been a while!”

Several drivers were able to wrap up their season-long Mid-States Conference Championships today, while others will conclude the season slate on Sunday, where rainy conditions are expected to give way to sun and heat on Independence Weekend.