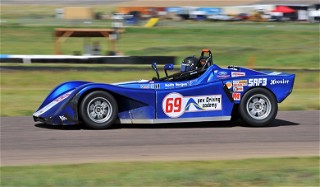 In race group two, Steve Meyer took the Formula F win and season title in his Piper DF5/Honda. In Formula Vee, Tyler Hunter swapped cars with Mark Felsen, and it propelled him to the win in his Vortec/VW.

Jim Valdez went flag-to-flag for the GT-2 class and overall win in race three driving his Valdez Motorsports BMW E46. Pettiford scored his second Touring 1 win of the weekend, having already clinched that title in his Go 4 It Racing Schools/Hoosier Chevrolet Corvette ZO6. Bob Schader took the Touring 3 win and Championship in his Hoosier Tire Nissan 350Z. In the best race of that run group, Tom Himes emerged on top of a race-long battle with Saturday’s winner, Kim McDonald, to win American Sedan in his CH4 Resources Ford Mustang. Himes’ win clinched the season-long title for the Mid-States Conference. Anthony Simmers drove his Volkswagen GTI to his second win of the weekend in Super Touring® Under, clinching that class title.

Race Four was small but mighty, with a race-long battle for the Prototype 2 victory between Jay Messenger’s Mazda/Hoosier/Jacobs Warriors Carbir/Mazda MX-1 and the Carbir CS-2 of Bruce Gurney.

“Bruce Gurney had some trouble yesterday,” said Messenger. “His motor wasn’t running right, but he got it fixed. I didn’t anticipate that. I went real fast this morning in qualifying, but maybe missed a little this afternoon with my rear shock setting. I kind of had a handful and he was real strong and stayed right there the whole time. I finally said to myself ‘don’t look in the mirrors. If you don’t look, he’ll go away.’ Luckily, I was able to beat him to the finish line.”

Messenger’s win propelled him to the Mid-States Championship.

In the final Majors race of the weekend for Spec Racer Ford and Spec Miata, Keith Verges led flag-to-flag in Spec Racer Ford 3 for his second win of the weekend. The race was slowed for a mid-race incident, involving Spec Miata point leader and Saturday winner John Harms and the SRF3 of Paul Moore, but on the restart, Verges was able to maintain his lead in the Apex Driving Academy Spec Racer Ford. Michael Cameron came home second, and Grayson Strathman, of Jennings, Oklahoma, earned the season Championship in his Shock Top Beer Spec Racer Ford Gen 3 after finishing third.

For all the event results and driver interviews, please visit www.scca.com/highplainsmajors.com.