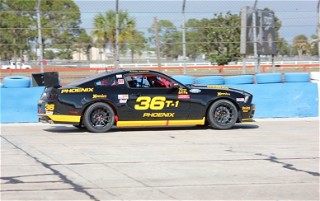 SEBRING, Florida (January 15, 2017) – The first of 11 Hoosier Racing Tire SCCA® Super Tour weekends has come to a close at Sebring International Raceway in Florida.  But before SCCA Club racers left the track, they put on one heck of a show for spectators.

A lot of the action came from the GT classes early in the afternoon.  At the beginning of the race, GT-1 pole sitter Vincent Allegretta immediately came under fire from Saturday GT-1 winner Simon Gregg.  He fended off Gregg and set sail for what appeared to be an easy win.  However, that wasn’t the case at all for the driver of the No. 42 Ave Motorsport/TA Sights and Sound Chevrolet Corvette.

“I had a nice little gap there for most of the race,” Allegretta admitted after winning Sunday’s event.  “There at the end, on the last lap, I got hung up by a few lapped cars and Preston Calvert got around me in the Porsche.  I was able to run him down, got back by him going into the last corner, and took the checkered flag.”

GT-3 was another class that was hotly contested over the weekend.  Bill McGavic, driver of the No. 69 No Mo Money Race Engineering Mazda RX-7, took the win in GT-3 Saturday and Sunday.  But both victories came after a fight with Richard Smith, also driving a Mazda RX-7.

“Richard and I had the same great battle over the two days,” McGavic said.  “Today, he got held up and I managed to pull a gap on him before I spun in Turn 17, hit the tires and stalled the car.  I backed up the car, stalled it again, got it started and took off after Richard.  I ran him down after he got held up again in traffic, and I got the win.”

But McGavic couldn’t claim the comeback of the day.  That honor went to Touring 3’s Jason Vein in the No. 0 BMW Spec E46.  Because his vehicle was found to be underweight after Saturday’s race, Vein had to start at the back of the 50-car field Sunday.

“I had to work my way through the entire field,” a breathless Vein said Sunday.  “I made the pass to gain the top position in class at the last turn on the last lap of the race.  I just barely made it.”

Of course, Spec Miata -- with a field of more than 70 cars -- added to Sunday’s show.  When the race started, Alex Bolanos, Jim Drago, Todd Lamb, Selin Rollan, Michael Carter and Danny Steyn where at the front and separated themselves from the rest of the field fairly quick.  That crew hung together for the first half of the race.  But as the laps dwindled, the pack of six cracked apart and Bolanos, who finished second on Saturday, stretched out a bit of a lead, an advantage that was never given up as he went on to win in his No. 57 Autotechnik/Amazon/Biostem/Apex Alignment Mazda Miata.

“I really worked hard last night and changed the setup a little bit,” said Bolanos who is affectionately known as the Cuban Missile. “With 70 cars behind you, everything has to be right.  So, we put new rubber on, worked on the suspension, and we nailed it.  It’s so hard to win one of these things.  It takes so many people.”