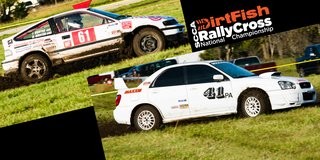 RallyCross TripleCross winners receive a special trophy for their achievement.  Kudos to both of this year’s winners.