Runoffs Return to TV on CBS Sports Network in December 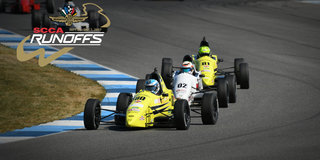 TOPEKA, Kan. (Nov. 22, 2017) – For the first time in several years, households across the United States will be able to experience the energy and excitement of SCCA® racing when select National Championship Runoffs® events from Indianapolis Motor Speedway air on the CBS Sports Network in December.

Starting at 3 p.m. on December 10, motorsport fans will be treated to the 72-car Spec Racer Ford Gen3 spectacle from IMS.  A week later at 3 p.m. on December 17, it’s the 72-car Spec Miata field that will wow race fans.  Then CBS Sports Network viewers will get a double-feature starting at 2 p.m. on Christmas Eve, December 24, when the American Sedan race is broadcast, followed by the Formula F event.

Each separate race, produced by Apex Broadcast for the ninth year in a row, will be 60 minutes in length and include commentary from long-time Runoffs stalwarts Rick Benjamin, Greg Creamer, Jeff Lepper and Dorsey Schroeder, with Heyward Wagner covering pit lane.  All broadcast times are Eastern. Check cable or satellite TV providers for local CBS Sports Network channels.

Mike Cobb, SCCA President and CEO, said the 2017 Runoffs was a historic event for the Club.  It was the first time the SCCA National Championship ever visited Indianapolis Motor Speedway, and a new entry record was set with 969 drivers taking to the track across 28 different classes during the event.

“Airtime on CBS Sports Network gives the Sports Car Club of America the opportunity to showcase its exciting brand of road racing on millions of televisions in homes across the nation,” Cobb said.  “This year’s event provided many different races from which to choose when constructing a broadcast schedule. The four classes that will air were selected based on the quality of competition, the ability to connect with a wide audience, and the desire to display a spectrum of SCCA Road Racing activities.  Overall, I really believe the Club has put its best foot forward for the audience at home.”

With races held Sept. 29-Oct. 1, the winner-take-all 2017 National Championship Runoffs consisted of 19-lap or 40-min. races on a 15-turn, 2.592-mile road course consisting of ten right-hand and five left-hand turns, as well as a main straight 3,700 feet in length. The configuration included portions of Indianapolis Motor Speedway previously utilized by Formula One for the U.S. Grand Prix and currently used by the Verizon IndyCar Series for the Grand Prix of Indianapolis.

With broadcasts presented by Mazda, all 28 Runoffs races from Indianapolis Motor Speedway are currently available for online viewing at Motor Trend OnDemand or at the 2017 SCCA Runoffs OnDemand webpage at SCCA.com.