Next Half of Hoosier Super Tour Season Starts at Buttonwillow 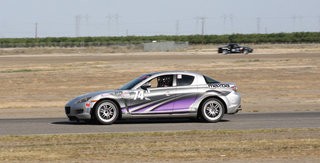 BUTTONWILLOW, Calif. (April 28, 2018) – The second half of the Hoosier Racing Tire SCCA® Super Tour 10-event season began Saturday at Buttonwillow Raceway Park during a race weekend hosted by the SCCA’s Cal Club Region.  After two consecutive events where Mother Nature played a role, SCCA racers were greeted in California by nothing but beautiful sunshine and temperatures.

The racing got good early on the 2.92-mile circuit with the Prototype 1 (P1) class. Parker Nicklin, in his silver Elan DP02 Mazda, moved to the lead early with Chip Romer, driving a similar racecar, and Johnnie Crean giving chase.  By lap five, Nicklin had established a good gap back to Crean, who had gotten by Romer for the second position.  Things continued in that order for a couple more laps until the P1 leaders began working through race traffic, and that’s when Crean made his move in the No. 35 Morrison’s Rogue Wilderness Adventures Dauntless Stohr P1 car.

“When we got to traffic, I went to the inside and Nicklin went to the outside,” winner Crean said after the race.  “Turns out, inside was better.”

An equally intriguing race developed in the Prototype 2 (P2) class.  There, Chuck Bona and his Stohr WF1 had the lead for two-thirds of the race.  But behind Bona, David Ferguson -- who opened the race back in eighth place -- was charging through the P2 field in his No. 75 Mazda Van Diemen RFS-03 racecar.  With only a handful of laps remaining, Ferguson managed to take the lead and move on for the win.

“I tried to make it as hard as possible on myself by stalling the car on grid and having to start last,” Ferguson joked after the race. “I just put my head down knowing we had 25 minutes to race.  I raced as hard as I could, thinking I wasn’t going to quite catch up to Chuck.  But then I saw him ahead of me, got up alongside, got the opportunity to get by … then I just put my head down.”

Of course, it wasn’t only Prototype classes that provided excitement during the day.  Another nail-biter developed in the Touring 4 race. Ross Murray opened the race in the lead, but Luis Sanchez moved to the front in his Scion FR-S after a full-course yellow bunched up the field.  Sanchez then worked hard to maintain that top spot, even though Murray was putting on lots of pressure.  At the end of Buttonwillow’s long backstretch on the very last lap, Murray made the move to take the lead and win in his No. 74 Hoosier Mazda RX-8 vehicle.

“At the beginning of the race, I got hung up by some Touring 2 cars and Luis got around me,” Murray said from the cockpit of his car afterwards. “I followed him the whole race. Saw the white flag, managed to get it done, and it was good.”

As has become the custom at Cal Club events, Saturday concluded with a fantastic meal, an amazing sunset and great comradery during the all-participant party.  Racing gets cranking again Sunday morning with events lasting no more than 35 minutes. Follow all the action live at www.scca.com/live.