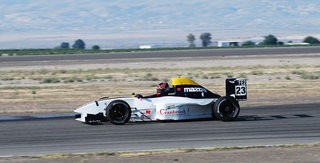 BUTTONWILLOW, Calif. (April 29, 2018) – The only Hoosier Racing Tire SCCA® Super Tour event in California this year wrapped up Sunday at Buttonwillow Raceway Park during an event hosted by SCCA’s California Sports Car Club, also known as Cal Club. Situated midway between San Diego and San Francisco, the 2.92-mile Buttonwillow circuit became the epicenter of battle over the weekend for many drivers from throughout the Golden State.

Spec Miata cranked up the excitement early Sunday morning with a fantastic battle between Tristan Littlehale, Mark Drennan and Saturday winner Nick Sommers. The trio, who created a large gap back to the rest of the field, battled ferociously throughout the whole 35-minute race.  Sommers and Drennan each spent time in the lead, while Littlehale spent the race in the catbird seat sizing up the competition.  As laps dwindled, Drennan found himself out front, but hounded by Littlehale and Sommers.  On the last lap, Sommers and Littlehale started sparring for position, which gave Drennan enough breathing room to bring home a victory in his No. 110 TFB Performance Mazda Miata.

“I was definitely looking in my mirrors,” a joyful Drennan said after the race. “The best thing I could see in my rearview mirror was them going side-by-side through the esses.  I knew then that it was my race.”

“I was lucky to defend off Nick so many times, but he kept getting in front of me. I kept having to battle back,” Drennan continued. “I almost lost the car probably three times, and I don’t usually spin. But it was a super exciting race. A total barn burner. That was the hardest-fought win I’ve ever had, honestly.  It was amazing.”

Amazing, too, was the Super Touring® Lite (STL) race on Sunday. Thomas Lepper, in a Honda Civic, grabbed the early lead, but was soon overtaken by Robert Strohmeyer who was piloting a Honda with a broken shift lever.  Saturday race winner James Bishop, in a Toyota Celica, was focused on passing Strohmeyer.  With only a few laps remaining in the race, Bishop was able to get ahead and lead the STL field.  However, he soon had car troubles and was repassed by Strohmeyer who went on to claim victory in his No. 188 HPD/Hoosier Tire/OS Giken Honda CRX HF.

“Bishop and Lepper actually started two rows up from me.  However, they got held up by a couple Touring 4 Mustangs,” Strohmeyer said. “I was just trying to bang out laps, but got caught by Bishop.  He passed me, but I got a good run on him down the front straightaway.”

“The car is really spectacular. I’m tickled with the performance,” Devenport said of his No. 23 Cranbrook Group Inc FE2 Mazda.  “It sounds good. It revs high. It’s got great power and pulls strong all the way up into the higher miles per hour range.”

While the various SCCA regions throughout California often work together to support one another, bragging rights are always at stake when it comes to motorsports. It should be noted that competitors from the San Francisco Region came out on top of the Hoosier Super Tour event at Buttonwillow with 28 wins.  Cal Club drivers netted 14 wins, and racers from the San Diego Region brought home 7 victories.

The Hoosier Super Tour series remains on the West Coast for it next event May 19-20 at Portland International Raceway in Oregon. That is the only race weekend on the schedule for May before the series heads back east for three events in June that will wrap up the 2018 Hoosier Super Tour season. Follow all the action live at www.scca.com/live.

Photo: Jim Devenport on his way to sweeping FE2 wins during the Hoosier Super Tour weekend at Buttonwillow Raceway Park