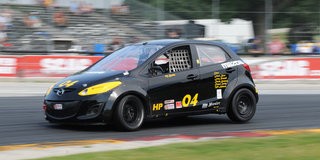 ELKHART LAKE, Wis. (June 17, 2018) – Things heated up, literally, at Road America Sunday in Elkhart Lake, Wisconsin, as temperatures soared into the 90s with high humidity, resulting in a heat index over 100 degrees. That created an additional challenge for competitors at the WeatherTech Chicago Region June Sprints, part of the 2018 Hoosier Racing Tire SCCA® Super Tour.  But winning at a legendary event such as the June Sprints is always a challenge.

Two Prototype 2 (P2) drivers up for the challenge Sunday were Greg Gyann and Tim Day Jr., both driving Stohr WF1 racecars. Day grabbed the lead early, but he couldn’t shake Gyann.  Just past the halfway point in the 13-lap race, Gyann grabbed the lead.  But just a few laps later, Day and Gyann made contact with one another and both ended up out of the race, but not before laying fluid down through the last couple corners of the 4.048-mile, 14-turn circuit.  Armen Megregian, driving the No. 31 Honda/GRP3 Motorsport Ligier JS 51, inherited the P2 lead and went on for the win.

“It was a mess back there from The Kink all the way to turn fourteen,” Megregian said about track conditions after the incident. “You just had to take it easy. You got to finish to finish first.”

One driver who admits he has not been “hot” in 2018 is Spec Miata ace Jim Drago. It’s been a tough season for Drago, but he turned it around during the June Sprints, taking wins both Saturday and Sunday in his No. 2 East Street Racing Mazda Miata.  On Saturday, he fought hard with Michael Carter in the closing laps for the win.  On Sunday, it was Chris Haldeman and Danny Steyn who kept Drago busy on the last lap.

“I over-slowed going into turn fourteen so I could get a good run and the other guys couldn’t get me,” Drago said about his last-corner strategy Sunday. “That got me up to the checkered flag.”

Another driver who heated up pretty good over the weekend was Scott Rettich.  For the first time in a while, he jumped in his No. 17 Alliance Autosport/Red Line Oil Formula Enterprises Mazda and took two FE wins on the weekend.  To put a bow on things, he then slid into his Spec Racer Ford Gen3 sled to do battle with the likes of John Black, Bobby Sak and Brian Schofield in an action-packed, final race for the weekend.  Coming up the long straight to the checkered flag, it was three-abreast with Rettich, Sak and Schofield pushing for the win.  The margin of victory was miniscule, but the win went to the No. 19 Elite Autosport/The Grotto Pita Pit car of Sak.

Several drivers managed a “sweep” over two days of racing at the June Sprints.  Some were dominant throughout their races, and some persevered until they came out on top. Mark Brakke, in the No. 04 Mazda2 H Production (HP) racecar, was the latter.  On Saturday, Steve Sargis and his Triumph Spitfire took an early lead, but fell away and handed the HP win to Brakke.  On Sunday, Sargis again stormed out to an early lead, but ended up off track after a few laps.  This time, however, Daniel Meller and his Datsun 210 inherited the top spot.  But Brakke refused to give up and passed Meller for the lead with only a handful of laps remaining.  Brakke then went on to claim his second HP win over two days.

“Dan and I ran in to a bit of traffic for a while,” Brakke said about Sunday’s race. “But when the traffic cleared out, I was finally able to gradually gain on Dan and finally made a successful pass.  Then he had the misfortune a few laps later of having something break on his car.”

There are no breaks this week for Hoosier Racing Tire SCCA Super Tour competitors as the series now moves directly to its final event of 2018 being held June 22-24 at Watkins Glen International in Upstate New York. Follow all the action live at www.scca.com/live.