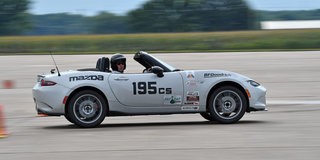 LINCOLN, Neb. (September 3, 2018) – In the week leading up to the 2018 Tire Rack SCCA ProSolo® Finale, the tentative weather forecasts stole the show. Even as competition runs started Saturday, competitors knew every run counted, because rain was constantly in the immediate forecast. Saturday competition was completed without a weather interruption, but drivers arrived at Lincoln AirPark Sunday morning to find a very damp surface. While it dried through the morning, another shower struck as the sixth group of cars left the grid. The rest of competition, including the challenges, would be in wet or drying conditions.

As is tradition, the Ladies Classes started competition in each heat and challenge competition. L4, the home of Solo Spec Coupe Ladies competitors, has been a tight class all season with five drivers starting the weekend with at least one win. Of them, two had a pair of wins. Jennifer Bedell and Teddie Alexandrova came into the weekend as the favorites and didn’t disappoint. Bedell set the early pace with co-driver Chris Peterson right behind. In the afternoon, Bedell found time on both sides, as did Alexandrova who finished in third. Peterson couldn’t find additional time but held onto the second and final trophy position. The win cemented Bedell’s ProSolo Points Championship in the class’ first year.

The ladies of L1 also came out swinging on Saturday morning. Christine Grice jumped to an early lead with Tamra Hunt close behind. Nicole Wong and Shelly Monfort stood in the third and fourth trophy positions in contrasting C7 Chevrolet Corvettes. The top three drivers found time in the afternoon, but not enough to shake up the trophies. Grice went on to take the class victory by 0.792 second over Hunt.

In the Ladies Challenge, it was the ladies of L2 stealing the show as Julie Heaton claimed the win from L2 over Tasha Mikko from L3. In a matching Subaru WRX, Jordan Towns claimed her second Fletcher Cup for winning the season Ladies Challenge Points Championship.

The two-stroke racing of Kart Modified (KM) has been incredibly close this season. Two drivers, Larry MacLeod and Paul Russell, came into the Finale with two wins, but Russell was a no-show this weekend. While this would usually leave the door wide open for MacLeod, Ryan Lower refused to go down without a fight. MacLeod was a perfect image of consistent speed, but Lower laid down a right-side run that couldn’t be matched Saturday afternoon. The result was a 0.052-second margin of victory for Lower and enough points to take over the season points lead by two points.

As the KM battle was raging on, the grid was shared with R1 competition. The mixed bag of Modified cars featured a packed field of F Modifieds (FM) and a lone C Modified (CM) and E Modified (EM). But that EM was none other than Jeff Kiesel, winner of eight of the last 16 R1 ProSolo Championships. Kiesel, Jason Hobbs and Greg Maloy were the only three drivers with two or more wins coming into the Finale. After being placed between Jeff and Zak Kiesel in the morning, Hobbs found time on both sides to take the R1 lead Saturday afternoon. Maloy also found time and claimed the third trophy spot, with Jeff Kiesel ahead in second and Zak behind in the fourth and final trophy spot. The win gave Hobbs his first ProSolo Championship.

Saturday afternoon was the time to go fast in C Street (CS) as the top four finishers logged their fastest times on their last dry looks at the mirrored courses. Charles Krampert took a 0.076-second victory over Dave Ogburn III. Scott Phillips followed by 0.183 second with Dennis Barrett in the fourth and final trophy position 0.164 second behind. All four trophy winners qualified for the Super Challenge, but only Ogburn made it past the second round of competition. From there, he faced a pair of Mazda MX-5s. First, he defeated Ken Motonishi from Street Touring Roadster (STR). He was then able to advance into the Top Eliminator round as Bartek Borowski from E Street (ES) ran out of gas on the start of his second run. In the final round, Ogburn defeated Mike King from H Street (HS) to take the ProSolo Finale Super Challenge win.

Mike King’s trip to the Super Challenge was no cake walk as many of the top drivers struggled with cones and red lights. Alex Piehl may have had the raw time to take the win, but coned away his fastest right-side run and hit a red light on his next and final dry attempt on that side. He’d finish second, 0.295 second behind King. In third, Greg Reno also struggled with cones and red lights, standing on only one clean and dry run on the left course. He finished 1.685 second back in the third and final trophy position. Once in the Super Challenge, King defeated strong drivers consistently. By defeating Kinch Reindl, the Solo Spec Coupe winner, and advancing to the Top Eliminator round, King claimed the 2018 Tire Rack SCCA ProSolo Super Challenge Championship.