Hickman Gets National Championship in Formula 1000 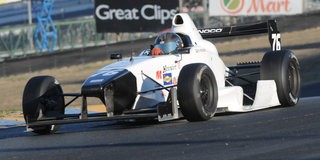 SONOMA, California (October 21, 2018) – As the old proverb says, “it ain’t over until it’s over.” Gary Hickman, of Santee, California, certainly proved the old adage Sunday in Formula 1000, the last race of the 55th SCCA® National Championship Runoffs® at Sonoma Raceway.

JR Osborne started from the Tire Rack pole in the No. 83 Geartronics/WesTrack Motor Racing Ralph Firman RFR F1000 Kawasaki, pulling away to a 12-second lead before a full-course yellow erased the gap on lap four. Shortly after being led back to the green flag to start lap eight by the Official Pace Car of the SCCA Runoffs, the Trans Am 455 Super Duty, Osborne pulled into pit lane and out of the race.

That handed the lead to Rod Rice, whose race had already been eventful. Though Rice pulled his Kawasaki-powered No. 44 Stohr F1000 off the grid in third position, he spun warming up his tires and took the green flag from the back of the field. He spun again in turn two on the opening lap when he was contacted by a competitor, but worked through the field to inherit the lead after Osborne’s misfortune.

When a second full-course caution slowed the field on lap 13, Rice again made a mistake and spun for the third time, handing the lead to Hickman, in his No. 76 Edge Engineering Phoenix F1K.12 Suzuki, who held the lead through the second restart on lap 15 until Rice’s streaking red machine went back by on lap 16 and kept Hickman at bay until the checkered flag. However, Rice received a three-spot penalty after the race. That handed the win to Hickman, his first-ever Runoffs victory.

James Michael was runner-up in the No. 37 Berlousche Engineering Stohr F1000/Suzuki, earning the Sunoco Hard Charger award after starting seventh.

“I feel fantastic,” Michael said. “I just tried to run a good, clean race. I was still struggling with this track, it’s a tough one. I just kept my nose clean and tried not to make any mistakes. I wasn’t expecting this, but I’m so happy.”

Ultimately finishing in the third spot was Mark Nixon in the No. 17 Nixon Motorsports Stohr F1000 Kawasaki.

Live, online video coverage of Runoffs races, presented by Mazda, is available throughout the three days of competition at SCCA.com/live. An audio race call, supplied by the Super Tour Radio broadcast team, is also available at www.SCCA.com/live , as well as live timing and scoring for each National Championship race.