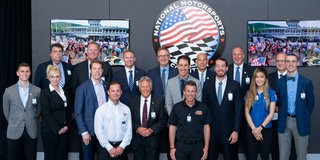 Representatives from IMSA, IndyCar, NASCAR, NHRA, SCCA and USAC traveled to Washington, D.C., last week to meet with Members of Congress, highlight the impact of the motorsports industry across the country and to encourage support for the Motorsports Fairness and Permanency Act.

Last week, SCCA President & CEO Mike Cobb joined the National Motorsports Coalition as it convened on Capitol Hill to meet with more than 30 congressional offices representing racing communities all around the country. During the meetings, the Coalition provided lawmakers with updates from each of the sanctioning bodies and urged Congress to take action to ensure the motorsports industry has the tax certainty it needs to continue making long-term investments in their facilities.

“It was quite an honor to stand shoulder to shoulder with other motorsport luminaries in advocating on behalf of Sports Car Club of America and enthusiasts across the country as part of the National Motorsports Coalition event in Washington D.C.,” Cobb said. “This effort truly illustrates that by pulling together we can generate a much larger voice on behalf of the industry while creating a higher tide of awareness regarding the issues that challenge our collective future.”

The visit to Capitol Hill was capped off with a reception coordinated with support from the Congressional Motorsports Caucus, an informal, bipartisan group of members dedicated to celebrating motorsports of all varieties and understanding their impact on American culture and the economy. Several drivers joined the National Motorsports Coalition in visiting with a group of nearly 200 Congressional members and their staff, including: Trent Hindman (SCCA/IMSA); Mario Andretti (IndyCar); Kyle Busch, Austin Cindric, Brad Keselowski and Joey Logano (NASCAR); Clay Millican, Steve Torrence (NHRA); and Tracey Gardiner and Samantha Tan (USAC). Guests heard remarks from ACCUS President George Silbermann and Representatives Mike Thompson, Bill Posey and Richard Hudson. Other special guests included representation from Speedway Motorsports, Inc., and Iowa Speedway.

Earlier in the week, House Ways and Means Select Revenue Measures Subcommittee Chairman Rep. Mike Thompson (CA-05) and Representatives Tom Reed (NY-23) and  Bill Posey (FL-08) introduced the bipartisan Motorsports Fairness and Permanency Act, which would make permanent the seven-year cost recovery period for motorsports entertainment complexes. In introducing the bill, each of the bill’s cosponsors spoke to the importance of this legislation.

Chairman Thompson noted, “Motorsports are a huge economic driver, both across the country and in our district, and the tracks used require constant investments to ensure they are safe for drivers and spectators alike. To make these investments, everyone in the industry needs long-term certainty about what they can rely on in our tax code, but in 2017, the provisions that provided that certainty expired. That’s why I introduced my bill, the Motorsports Fairness and Permanency Act, which makes the seven-year cost recovery period permanent for the industry, incentivizing more investment and ensuring motorsports facilities have the same advantages as other entertainment complexes.”

With motorsports having a presence in nearly every state across the country, Representatives Bill Posey and Mike Thompson recently launched the Congressional Motorsports Caucus (CMC), whose members include more than 50 Congressmen/women. CMC, with The National Motorsports Coalition, will continue to work closely with industry stakeholders and Congressional leaders to advocate for issues in the best interests of the motorsports industry.