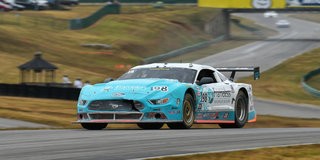 ALTON, Va. (Oct. 13, 2019) -- The ground-pounding GT-1 class took to VIRginia International Raceway’s 18-turn, 3.27-mile circuit Sunday afternoon to decide who would be SCCA’s 2019 National Champion. Behind Tire Rack Pole Award winner Tony Ave, of Maiden, North Carolina, the field took to the track for a scheduled 15-lap race with rain clouds looming. But it wasn’t rain that made things tricky. Instead, a car at the rear of the field laid slick fluid down along a substantial portion of the track on the pace lap. That resulted in very slippery conditions for the first lap of the GT-1 race.

Ave, in the No. 4 Ave Motorsports Inc. Chevrolet Corvette, jumped out to the lead with Ernie Francis Jr., of Southwest Ranches, Florida, following behind. Ave looked fast and tore his way through the South Bend portion of the track before entering the Oak Tree Curve where he slid off, damaging the left-rear of the car.

Francis, in the No. 198 Frameless Shower Doors Ford Mustang, took the lead and was ahead when the second lap started, but Ave was back on track and closing fast. In a matter of only a couple corners, Ave was back in front.

Further back in the pack, various drivers found themselves spinning off course. Michael Lewis, the defending GT-1 National Champion, ended up in the grass. Ron Malec, in the No. 114 Ford Mustang, got the worst of it, making contact with a tire wall along the Snake complex of bends just before the Cross Over Bridge.

At that point, the race was halted and cars brought back into pit lane so track cleanup could occur. After the delay, GT-1 competitors headed back on track for two more pace laps, followed by three racing laps to decide the National Champion.

Once again, Ave was on it at the start, tip-toeing his way around the circuit with Francis behind, both leaving plumes of circling oil dry in their wake. Things appeared to be going well until Ave came through Hog Pen where he had just a little too much speed and slid off course, again.

Francis inherited the lead a second time and was able to keep his car on track for the win even though Ave was closing on him once again. For Francis, this is his first National Championship in his first Runoffs appearance.

“The conditions out there were definitely the ones where you want to be second in the race for most of it to see what the guy in front of you does and what the conditions are like,” said the 21-year-old Francis. “I really would’ve liked to win in a different way, but really happy to be out here and get my first win at the Runoffs and hopefully come back again next year.

“With all the Trans Am Series racing I’ve done and championships I’ve won over there, I don’t think I’ve had as much pressure to win a race as I’ve had this weekend,” Francis continued. “The Runoffs were always a place I wanted to go and win at. This was my first time being here and it was an awesome event. It was like a weeklong party out here. There’s things to do every night. Everybody was super awesome.”

“We get the start and, I’m telling you, it was an ice rink,” Ave said about lap one. “I get up through the Esses and I could sort of see where the line of oil was, but underestimated just how slippery it was going to be going up into Oak Tree. So, I slid off and that is kind of where my race ended.

“When we got going again, I did the best I could,” Ave continued, “but I got to Hog Pen and it was the only part of the race track where I couldn’t sort of test the grip on the pace lap in the oil dry and I just was going too fast and I couldn’t stop it … and the car just slid off the road.”

In those last couple laps, Todd Peterson, of Boulder, Colorado, and David Pintaric, of Canfield, Ohio, did battle for the last spot on the podium. Pintaric got around Peterson and brought his No. #57 Kryderacing Cadillac CTS-V home in third place.

“Cars where all over the place. It was challenging,” Pintaric said after the race. “I did good just to keep it on the asphalt. The old ‘oil and water’ mixture really made it treacherous out there.”

Live, online video coverage of Runoffs races, presented by Mazda, is available throughout the three days of competition at SCCA.com/live. An audio race call, supplied by the Super Tour Radio presented by Hoosier Racing Tire broadcast team, is also available at www.SCCA.com/live, as well as live timing and scoring for each National Championship race.