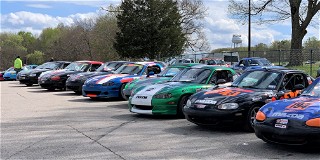 The Hoosier Racing Tire SCCA Super Tour this weekend at VIRginia International Raceway (VIR) is packed with around 420 entries. A chunk of that belongs to Spec Miata (SM) whose field consists of around 70 cars. And within that throng will be a handful of young lions fighting for the 2022 First Gear Mazda Challenge (FGMC) championship.

Spec Miata drivers under the age of 25 as of January 31, 2022, are automatically eligible for the special FGMC points championship if they are competing at U.S. Majors Tour Conference and Hoosier Super Tour events. Those who finish well in the standings will earn added recognition, Hoosier Racing Tire contingencies, and a direct path to the Mazda MX-5 Cup Shootout. And within FGMC is a sub-challenge that involves only Hoosier Super Tour races. Up for grabs in that subset is one free entry into the 2022 SCCA National Championship Runoffs taking place at VIR later in the year.

The 2021 FGMC winner from the Hoosier Super Tour was Preston Pardus, who went on to win SM at Indianapolis Motor Speedway during last year’s Runoffs. Pardus is at VIR this weekend preparing to defend his championship in the fall, and he’s in his final year of eligibility for FGMC.

“It’s a cool program, obviously,“ Pardus said Friday morning after practice. “As everyone knows, racing comes at a cost. To have Mazda, Hoosier and SCCA step up with this program … it’s huge and eliminates some of that cost.”

Headed into VIR this weekend, which is the fifth of 10 Hoosier Super Tour events on the 2022 schedule, Connor Zilisch leads the FGMC field. He was the most recent Jim Fitzgerald Rookie of the Year honoree, but isn’t at VIR this weekend to amass more FGMC points. Charles Mactutus, currently second in FGMC points, is at VIR and posted the fourth best qualify time Friday. He finished fourth in the 2021 FGMC standings and is looking to improve on that finish.

“This year I’m working with OPM Autosports and Danny Steyn,” Mactutus said. “He’s great to learn from, and all that experience helps a lot. This is my best year on the Hoosier Super Tour so far.”

Another driver in FGMC’s top ten who is at VIR this weekend is Boris Said Jr. He finished 15th in the standings last year, but the 18-year-old currently sits ninth. He’s only done a dozen races in SM so far, but he’s learning every step of the way.

“I feel like I’m just doing everything better this year,” Said noted.

One thing Pardus, Mactutus and Said Jr. all agreed on was how strong “young” SM competitors are entering the Summit Racing Equipment SCCA Road Racing program. Said Jr. finds that fact adds to the level of competition, and Mactutus believes young drivers form the backbone of the class today. Pardus, who competes occasionally in NASCAR’s Xfinity Series, said the talent level keeps the class interesting.

“It has been really cool to see the Spec Miata class evolve,” Pardus said. “I don’t think the class has ever been healthier as far as teen drivers running up front or winning Hoosier Super Tour races. And for young drivers, the Mazda First Gear Challenge is something to look forward to because it creates a competition group for people their own age so they can see where they rank against one another.”

If you can’t be at VIR, follow the action live online at SCCA.com. There you’ll find enhanced timing and scoring, the Super Tour Radio presented by Hoosier Racing Tire broadcast supplied by Performance Motorsports Network, and multiple trackside video feeds.

Photo: A portion of the Spec Miata field at VIR this weekend for the Hoosier Super Tour