John Doonan: From The Sandbox To Grand Marshal 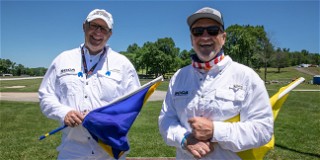 Depending on when you met him, John Doonan could have been everything from IMSA President to “that kid in the dirt at Road America.” One thing is almost for certain though, whenever you met John Doonan, it was at the race track. This weekend, he’s far from the sandbox of his youth metaphorically, but still at Road America – only this time it’s as the Grand Marshal of the WeatherTech Chicago Region SCCA June Sprints, the final Hoosier Racing Tire Super Tour event of the season.

SCCA.com’s Reece White was able to catch up with Doonan, who spent Friday with SCCA President Michael Cobb showing flags to SCCA racers at Turn 3 at Road America. That was a return to Doonan’s Chicago-area SCCA roots, where he grew up as a classic “track brat” before moving on, eventually, to head of Mazda Motorsports and then to his current position at IMSA.

Reece White: Tell me about growing up SCCA: what that meant to you as a kid, and what that looked like at the track and at home?

John Doonan: To be candid, there is simply no chance that I am able to land where I have landed as of today, and no chance I would have been able to have the opportunities I have had without my childhood days around grassroots side of our sport. As I reflect back, from the earliest of days when my dad was racing in Midwestern Council to every single moment of my time in SCCA I have been learning. No doubt about it.

From rushing to the mailbox after school to collect entry forms that had come in (Mom was the Chief Registrar), and also scooping up the latest issue of Chicago Region’s Piston Patter, SCCA’s SportsCar Magazine, or Blackhawk Valley Region’s newsletter before my dad could get his hands on it…

To riding on the equipment truck as the sun was coming up at Blackhawk Farms or Road America dropping flags (originally corner worker paddles), oil dry, shovels etc. on all the corner stations….

To sitting in on worker meetings and driver meetings…

To sitting in on Board meetings away from the race track…

I had the wonderful opportunity to learn our sport from so many special and dedicated people. I learned how to run a safe and successful sports car race event weekend.

For us, it was all about doing it as a family. The same car that took us to school during the week was the tow vehicle on race weekends. We cooked out at the track and enjoyed the racing family because it was truly a family. So many of the people that my dad raced with remain some of our closest friends and we have all supported one another during the highs and lows of life outside of racing.

RW: I learned a long time ago that motorsports is much better off if my personal contribution is not on the track as a driver, but on this side of business. How about you, do you have much in-car experience?

JD: I spent all of those years growing up watching others do the on-track portion of the sport and thought, “wow, that looks easy”. Fortunately I was able to do my first driver’s school in the mid-1990s, do a few races, and have done several events sprinkled throughout the last 20 years in a variety of cars.

But truth be told, from a very young age, it was the business side of the sport that was most intriguing. The Public Relations, Marketing, Advertising, Activation, Promotions, and Event side of our sport was where I felt I could try to make the most impact and where my passion has been.

Having said all of that, I would love to be able to do some vintage or historic racing when time allows in the coming years. I have been fortunate to acquire a few relevant cars (most notably my grandfather’s 1947 Kurtis Kraft Midget) and located my father’s original race car. So, time will tell. Time is the crucial element given all of the programs and projects we are focused on the IMSA side.

RW: You’ve been indirectly and yet somehow directly involved with the SCCA, and not just road racing, for a long time. Especially from your current seat at the top of the sports car racing food chain, where does the SCCA fit in to greater motorsports world?

JD: Without a doubt, the SCCA is foundational to our sport and its future. Clearly there are many who have joined SCCA for the driving aspect of the Club’s mission. Road Rally, Solo, Road Racing and Rallycross all play a critical role for members of exercise their passion behind the wheel.

But, the element of the SCCA that I know can also have a far reaching impact on the growth of our sport is in the race official and corner worker aspect of what we do. This has been at the core of the objectives of the partnership between IMSA and the SCCA with much work yet to be done. Worker training modules are being developed to help educate members on opportunities to be involved in the sport outside of driving. I also firmly believe that programs like this and what SCCA has done with Track Night in America are so critical to the long-term strength and viability of motorsports. We need to full the passion pipeline with the next generation of enthusiasts and I see SCCA being the attainable launchpad for future drivers, officials, and fans.

RW: With both the IMSA schedule and the extemporaneous events (Doonan is at the June Sprints this weekend and Le Mans last weekend, among his IMSA-based schedule), you spend a lot of time away from home to have this career. Can you talk about some of those sacrifices and the supporters of yours that allow this to be possible?

JD: There is no question that a career in motorsports is a lifestyle versus just a job. With that being the case, there are definitely some challenges and sacrifices that come with this lifestyle choice.

I have been very blessed with a very understanding family over the years. It has also not been easy and I have been far perfect in my execution. But, I have tried to be “home and present” for as much time and as many moments as possible. I also continue to search for the proper balance. None of what I have had the opportunity to be part of over my career would have been possible without the support of Kristin, my wife, and the further understanding of my children Carlee, Alex, and Maggie. They have been big cheerleaders during the victories and good moment, while at the same time, being supportive when things did not go the right way.

RW: With all of that in mind, this really is a full circle moment from your childhood – can you even summarize what it means to be asked to be the Grand Marshal of the June Sprints?

JD: I cannot begin to thank the Chicago Region SCCA for this opportunity and honor here at the June Sprints. I am so honored and frankly don’t feel worthy, but I can assure you that this means a tremendous amount to me and always will.

I was at the June Sprints when I was six weeks old and have come to as many June Sprints weekends as possible ever since. I always saw the June Sprints as “THE preview” to the SCCA Championship Runoffs. And, back when I could play favorites, I always did. I wanted to see “my drivers” do well at Road America and (at the time) Road Atlanta (back when it was the Champion Spark Plug Road Racing Classic “Runoffs” or the Valvoline Runoffs). I had been watching (and still now stay in touch) with drivers like Rick Dittman (BP/GT1), Jerry Dunbar (GT1), Rob Dyson (B Sedan/GT-2), Tony Kester (FF), Steve Knapp (S2000), Elliott Forbes Robinson (A Production), Scott Rubenzer (FV and FF), Steve Sargis (F, G, and H Production), Ron Sharp (G Production), Steve Schwitters (G Production), Rob Warkocki (GT3). When one of these (and several others) drivers ran well at the Sprints and then went on to a solid run at the Runoffs, I was over the moon.

And without playing favorites when it comes to race tracks, Road America will always be “home” to me. I went from playing with my Matchbox cars in the dirt to having the opportunities that I have had. Again, I am so grateful to the Chicago Region SCCA and the entire SCCA. There is zero chance that I get to where I am today without all the learnings and so many people who have given me a chance along the way. I used to walk the paddock as a little boy and so many people welcomed me into their paddock space when they could have asked me to get out of the way. I firmly believe each of us has a chance to welcome in the next generation (like so many did for me) and give young people a chance to have a career in OUR sport. You never know when you are going to change someone’s life. I know many people did that for me.

More information on the Hoosier Super Tour and the June Sprints can be found here.